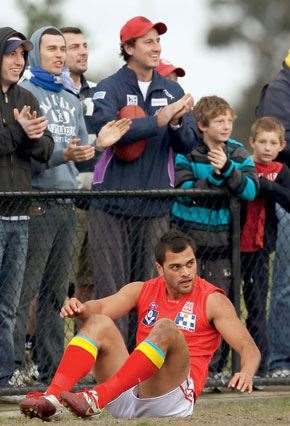 Karmichael Hunt will be knocked down, but he’ll get up again ... he has to.
Image: Getty Images

You mention marketing. Is Folau playing Sydney Premier Division footy really going to win hearts and minds out west?Look, I don’t know what their strategies are going to be, but I suspect you’ll see Israel plastered across billboards everywhere, you’ll see him on T-shirts, on posters, on paraphernalia. I mean, you could pay Gary Ablett Jr a million bucks to play out there, but no one would have a clue what he looks like. You’d get enormous onfield impact from Gary, and that would translate to winning games and getting bums on seats. The view with Folau is just get someone who’s recognised. Will it succeed? Well, that’s not going to be known for at least four years. And even if he doesn’t play a game, some marketing guy will come out and say “look, we’ve generated X number of dollars” and all that ...Do you think such enormous salaries would create disharmony within a club?

I’m not sure. As a player, I played with guys who got more money than me, I played with guys who got less, and it was never really an issue for me. You know, Sydney has a history of bringing up guys from Melbourne, and when myself and Tony Lockett came up I’m assuming we were on more money than someone like Paul Kelly. Now, I don’t know that for a fact, but my point is this: it’s happened before where less talented players

get more money than more talented players. Ultimately, you worry about what you’re getting paid and, yes, you might be aware someone’s on more, and you might be disappointed by that, but it doesn’t carry over to the locker room.

At the end of the day, most players, even the ones coming out and saying these contracts are ridiculous, wouldn’t have a problem playing with Hunt or Folau. So I don’t think it’ll impact the clubs internally. Look at those blokes who play with Karmichael on the weekend. Most of those guys are probably earning

no more than 20 grand a year, but they were still

rapt when he kicked his

Given these club dynamics, how would you deal with the presence of a Hunt or a Folau at the Swans?

If we had that situation here, we’d sit the leadership group down and say, “Look boys, we want to make this clear. These are the reasons why we’re bringing this guy here … ” We wouldn’t tell them his contract, but we’d make it clear to them that he wasn’t getting paid a million bucks to play AFL footy. I don’t know what detail you’d goingto, but you certainly owe it to them to explain the situation. And you owe it to them to ask their opinion. And if they said

no, they didn’t want him at the club, then we wouldn’t take him.

Can you see a time when the Swans are primarily stocked with local talent?

Well, I think a watershed moment for us was the introduction of our academy. We’ve been pushing that with the AFL for many years and it’s pivotal that we give Sydney kids an incentive to stick with AFL footy, to give them a training base. So having that academy is a huge step forward for this club. We can now go to youngsters and say, “Look, there is a direct pathway to the Swans.” It also means we can have a significant say in their development from the time they’re ten, right up to their draft day. So I think it’ll have a huge bearing on how many Sydney kids play for the Swans.