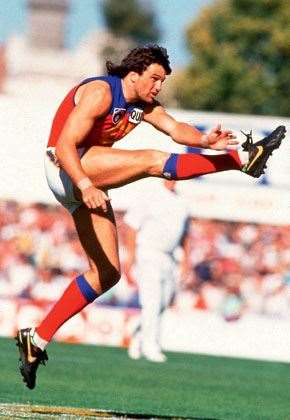 This current obsession with expansion, flags on the map – is this for the good of the game, or is it just to line pockets of the suits in head office?

Well, one of the things I find frustrating – and I’m not sure that this is necessarily driven by the AFL – is this notion of a battle of the codes. I don’t think it’s good for sport in general. You know, I’ve lived in Sydney for a long time now and I have enormous respect for the other codes. At the Swans we’ve got the Roosters next door and I’ll often see

Brian Smith at lunch. I catch up with Ricky Stuart occasionally; I met Robbie Deans the other day; I consider David Gallop a friend. I think the ability to co-exist is one of the great things the Swans have achieved. It’s been a real positive for us as a football club – we’ve never been seen trying to poach any NRL followers. If they want to come watch us on Saturday arvo then watch their NRL team that night, great. So that’s where I’m most uncomfortable, when it becomes AFL vs NRL vs soccer. I mean, we’re all going to be here. Let’s be perfectly frank, no one’s going anywhere. If the AFL thinks rugby league’s going to disappear, I’ve lived in Sydney long enough to tell them that ain’t going to happen.

Has that policy of co-existence always been in the Swans’ mission statement?

I think it just comes with experience; it’s something you understand gradually. You know, everyone comes in with all guns blazing, thinking they’re going to take over the world. But you hit a point, and this has certainly happened at the Swans, where you realise that you’re just here to be a football club, a successful club, and if league or union or

soccer people want to come and follow, fantastic. But that’s got to be a result of being a good organisation, not critically attacking anyone, or poaching anyone.

And so to Karmichael Hunt and Israel Folau! Can they become AFL-standard players?

Well, that’s ultimately what everyone will judge this whole experiment on. Obviously there are a lot of levels to this thing – you’ve got the player, the player manager, the club, the opportunities – so I don’t think you can begrudge Folau or Hunt for doing this. Can they be successful? Look, it’s going to be difficult, very difficult.

Hopefully they get some sort of a grace period where they’re allowed to develop into the game. That might not happen because of the salaries they’re on. But I don’t think we’re going to know until the last years of their contracts whether it’s worked. So my hope in all this is that people don’t jump down their throats and do give them time to develop.