The NBA All Alphabet League continues, with today's unveiling of the S Team.

The S Team are have undoubtedly the most back court creativity in the Alphabet League, with outstanding and diverse front court finishers both out the perimeter and at (and above) the rim at their disposal.

The S Team are helmed by one of the greatest players every to lace ‘em up, and arguably the best floor general ever, in John Houston Stockton.

Stockton’s raw numbers are remarkable: his 15,806 career assists and 3,265 career steals will never be caught. He's miles ahead of Jason Kidd; the career #2 in both stats. The closest active player is Chris Paul, who is over 6000 assists and 1000 steals behind the Jazz legend.

Stockton was a master half-court orchestrator, who could make every type of pass. The fact that there is a YouTube clip named John Stockton: Passing skills Part 1 that runs for over 15 minutes (!) should tell you about the sheer number and variety of passes Stockton made.

Stock was the consummate point guard: he used his monstrous mitts to make passes off the dribble on both sides of his body – for a little guy, he handled the rock like it was a tennis ball – he also possessed a criminally underrated first step that allowed him to breach the defence before using the trick that literally every small point guard has used since the beginning of time: suck the big into thinking he has an easy block, then slide the pocket pass to his man for a dunk.

Stockton patience is a lesson for all young floor generals. On the rare times that he was forced to pick up his dribble, Stockton would make full use of his 5 seconds to look off the defence and allow time for his teammates to move into optimum positions, before making the killer pass.

There was more to his game that just setting people up, however. Stockton was a dynamite defender, despite his diminutive frame. He was a tough SOB, more than happy to body up against literally any player, using his elite smarts and ninja-like hand speed to swipe the ball.

He was also clutch. For all the accolades his friend and teammate Karl Malone deservedly garnered, it was Stockton that would inevitably take the late game shot. He retired with 12 (appropriately enough) game winning shots to his credit, 4 of those being buzzer beaters. His ability to hit shots in traffic and his deadly jumper – career 52/38/83 shooting splits – combined with the ever present ability to find an open player in the right spot made him a late game assassin, with the defense unable to commit to playing the shot or the pass totally.

Stockton finished his career with 11 All NBA selections, 10 All Star appearances (including one aged 37), was 5 time All Defense, led the league in assists on 9 straight occasions and twice led the NBA in steals.

Sharman is a star of the game on so many levels.

As a player, he formed one of the greatest back courts in history with Bob Cousy, averaging 18.1 points per game and winning 4 NBA titles over his 10 years as a Celtic. Sharman was an 8 time All Star and was named to 7 All NBA teams over his career. His accurate jump shooting earned him his Bullseye nickname, but he was an all round talent, playing excellent defence and proving to be a solid – if far less flashy than his back court mate – play maker.

Sharman’s career didn’t start until he was aged 24, as he chased his baseball dreams. Sharman spent 5 years in the Brooklyn Dodgers system, making the big league squad from time to time, although he never appeared in a major league game for the Dodgers.

After 11 seasons in the NBA, Sharman retired to become a coach, leading to a college stint coaching California State before returning to the pro game. Sharman coached the Utah Stars to the ABA crown in 1971 before switching to the NBA to coach the Lakers. His first season was legendary: he led the team to an at the time all time best 69-13 record before winning the title. They made the finals the next season, falling to the Knicks. From there, his ageing team fell away and Sharman finished up with the Lakers at the end of the 1976 season, where he coached Kareem Abdul-Jabbarto an MVP in the centre’s first Lakers campaign.

Sharman was an innovative coach, creating offensive sets using now common tactics like back screens and quick reversals. He’s also credited with inventing the morning shoot around, that every NBA team quickly adopted when he brought it in whilst in LA.

There will be a day in the near future that this spot would be reserved for the ultimate point forward in Ben Simmons, but for the moment the former Kings and Hornets sharpshooter Peja Stojakovic gets the nod.

The Serbian/Greek dual national enjoyed a 13 year run in the NBA, draining high arcing deep 3’s with his unconventional slingshot release to the tune of 17.1 point per game, for his career shooting 40.1% from behind the arc.

Stojakovic, a 1996 1st round pick, didn’t come across to the NBA until the 1999 season. It took him a little while to find his feet, before he exploded in his 3rd season – his first in the NBA as a starter – putting up 20.4 points and 5.8 rebounds per game. In the following 3 seasons, Peja won all 3 of his All Star appearances as well as earning ALL NBA status in the 2004 campaign.

The 6’10” wing was far bigger than most small forwards of the era, and combined that pure size with underrated strength to create space for his dead eye jump shots. Stojakovic gained acclaim as a member of those oh so entertaining Kings teams of the early 2000’s. In a team full of play making savants, Peja’s role was to finish, which he did with aplomb. But that’s not to denigrate his own play making; Peja was a creative passer in his own right, able to make something out of nothing for his teammates.

He went on to enjoy success alongside Chris Paul in New Orleans before winding down in Toronto and Dallas, where he won a title in 2011. Peja could certainly have played on for a few more years in a late career Kyle Korver type role, but chose to cap his career with a ring and moved back to Greece.

Thanks to his two handed set-shot style of shooting, Schayes can look like a relic of a bygone era, but he was strangely a very modern player, who was generations ahead of his time.

The term ‘stretch 4’ was still half a century away from being coined, but Schayes - who has a street named after him in his native Bronx – was perhaps the first stretch 4 in the NBA. The 6’8” power forward regularly fired away from roughly where the modern 3 point line sits, and his those shots with some regularity. He was also genuinely ambidextrous, thanks to his turning a setback into an opportunity. Schayes broke his right arm early in 1954 season and played out the campaign in a cast. He spent the bulk of that season shooting left handed – he still averaged 17.1 points and shot 82.7% from the line – which was a skill he used to great effect for the rest of his career.

He was also relatively scientific in his approach to training. Famously, he installed a 14 inch diameter rim inside the regulation 18 inch hoop to help improve his shooting accuracy.

Schayes was a match up nightmare. A dead eye shot who would leverage that into quick drives if you closed out too hard on him. The 12 time All NBA and All Star selection led his Syracuse Nationals to the 1955 NBA championship.

Much like Brandon Roy, Stoudamire was a flame that burnt brightly before quickly fading away. Thankfully we got to experience a much longer peak for STAT that we did for the Blazers wing.

Like Roy, Stoudamire slipped to a mid lottery pick despite having #1 overall talent, due to concerning medical assessments. Phoenix were certainly happy that they took Stoudamire at #9 in 2002. He was an athletic marvel in his early career, able to run the floor like a guard, and throw it down with fury on each and every defender he encountered. His combination with Steve Nash struck terror into any defence.

Stoudamire lept from the blocks, winning Rookie of the Year, and winning the first of his 6 All Star and 5 All NBA nods before missing practically all of the 2006 season due to micro fracture surgery. He was able to return to All Star levels upon his return, winning All NBA and All Star honours in his next 4 seasons, despite continuing to periodically miss games for maintenance purposes.

At the end of the 2010 season, Stoudamire joined his former Suns coach Mike D’Antoni in New York, signing as a free agent. His first season in the Big Apple was tremendous: 25.3 points, 8.2 boards and 1.9 blocks, including 9 straight 30 point games at one stage. Unfortunately, the injury bug would again bite, and this time there was no coming back. In his final 5 seasons – 3 and a half spent as a Knick – he missed more than 30 games per season on average, and was a shadow of his formerly dominating self athletically. He was essentially a bit player from the age of 30, and retired at the end of the 2016 season, aged 33.

Despite the long tail to his career, Stoudamire still posted 18.9 points, 7.8 rebounds and 1.2 blocks through his career. 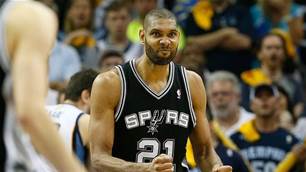