The BBL regular season may be near its end, but the finals picture is still to be cleared up.

Sydney Thunder kept their chances alive with a tight win against Perth Scorchers who were eliminated with the defeat. In the evening match, Hobart Hurricanes posted a massive total to beat Adelaide Strikers. By virtue of the result, Sydney Sixers secured second place while the Hurricanes qualified for the finals. 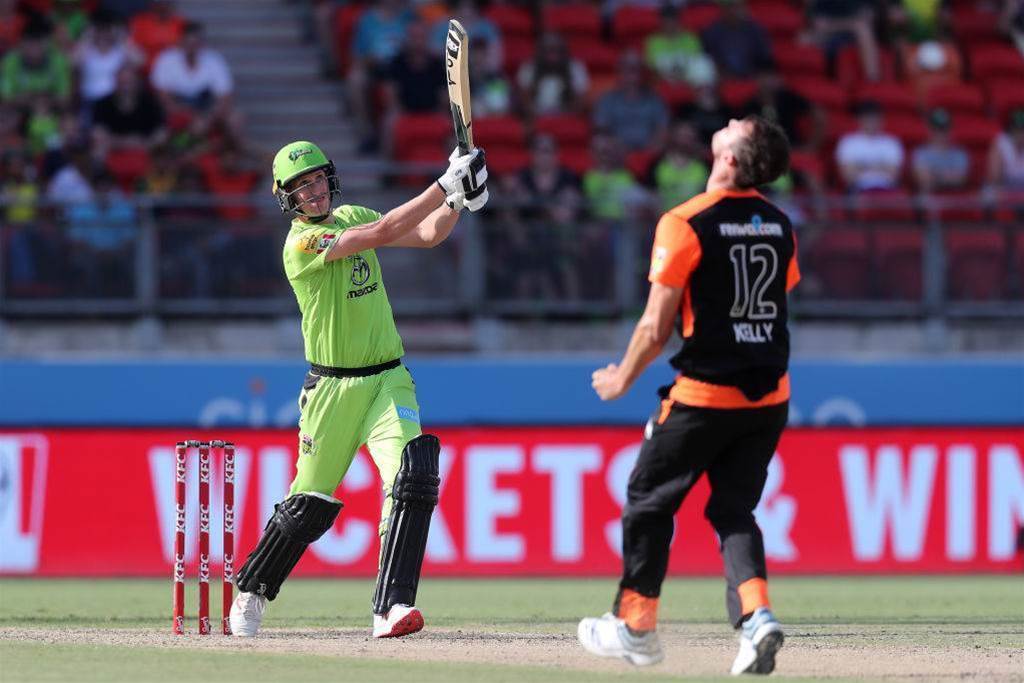 Rain over Sydney Showgrounds made the regular season finale between Sydney Thunder and Perth Scorchers anything but that. The Scorchers will feel slightly cheated that the rain ended their innings, but the match twisted in the final few overs to make the game a nail biter. Sydney brought back Chris Tremain while Morne Morkel made his Scorchers debut as Chris Jordan has joined up with England for their upcoming ODI series in South Africa.

Batting first, Scorchers were hoping that their openers Josh Inglis and Liam Livingstone would get them off to a flyer. Gurinder Sandhu and Daniel Sams served up two tight overs in the Powerplay while Inglis hit three fours before falling to Chris Morris. A 143kph yorker sent the opener back as Thunder made the breakthrough in the fifth over.

Mitch Marsh was next in but could not find his usual fluidity with the bat. Trying to his way into form, Marsh could only find Alex Hales on the long-on boundary as the Scorchers fell to 2/47. With runs drying up through excellent bowling, Livingstone was undone by the slowness of the pitch and edged behind off Tremain.

In the 11th over, Daniel Sams picked up Ashton Turner and in doing so broke the BBL record of wickets taken in a season. Turner's miscued pull shot gave Sams his 25th wicket of BBL09 while the Scorchers were in trouble at 4/64 in the 11th over.

Cameron Bancroft and Tim David were able to hit some boundaries before rain brought play to a halt at 4/99 at the end of the 15th over. Rain delayed play for an hour before the game resumed with the Thunder requiring 96 runs from 12 overs under DLS.

Thunder started their innings by making the asking rate of eight runs per over look easy. In the second over, Morne Morkel was smashed for 18 in a less than welcoming opening over in the BBL. As soon as the truncated powerplay was over, Scorchers resorted to rotating bowlers to get a much-needed wicket. Fawad Ahmed, Matthew Kelly and Ashton Agar struggled as Alex Hales and Usman Khawaja were scoring well. Mitch Marsh gave himself an over, but Hales launched him way back over long-on as the Thunder were strolling to victory.

The game started to turn in the next over when Hales' innings ended with a top edge off the bowling of Fawad Ahmed. Hales has scored 47 from 27 balls and looked like it was enough to give his team victory. However, the Scorchers has other ideas. Khawaja was next to fall when he found himself out of his crease trying to take a run and Inglis ensured the opener was run out. Thunder needed 18 from 18 balls, but Fawad Ahmed's last over conceded four runs as the pressure tightened.

In the penultimate over, Scorchers tightened the screw further when Jhye Richardson conceded just two runs plus took Alex Ross' off stump as the tension mounted. Thunder needed 12 from the last over, and Matt Kelly bowled it. Thunder captain Callum Ferguson took three runs from the first two balls to leave all-rounder Chris Morris on strike.

Morris' season with the bat had been nothing short of abysmal. That changed when Kelly missed his yorker length and Morris, anticipating a pitch up delivery, was set and struck the ball sweetly for six. With the momentum swung back, and pressure on Kelly, the bowler bowled another half volley, and Morris smoked the ball through the covers to win the game. 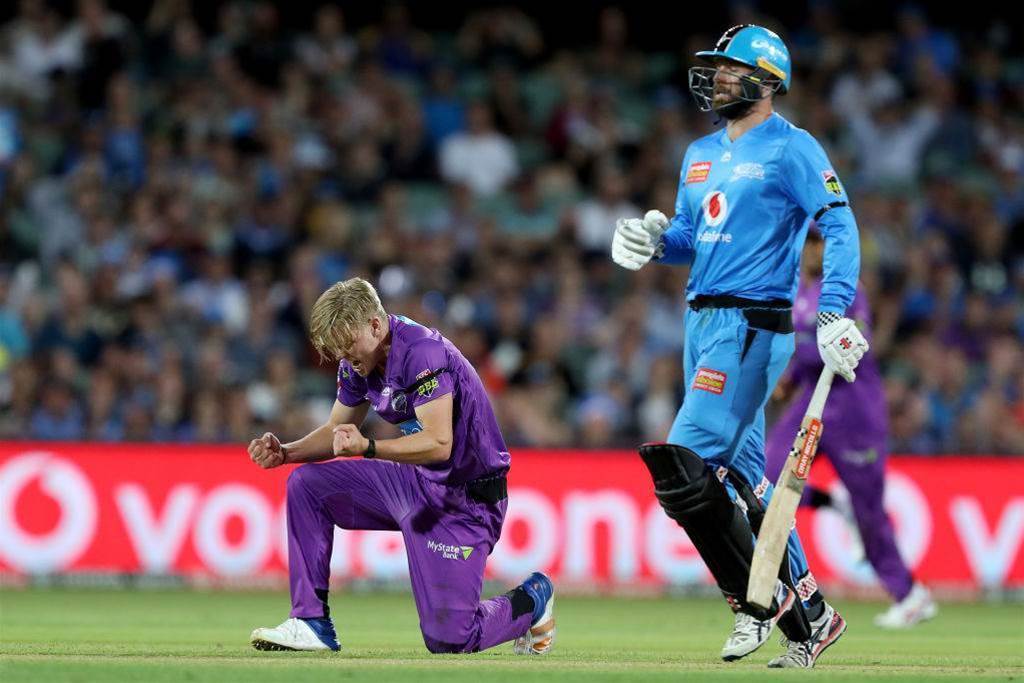 Matthew Wade and D'Arcy Short picked up where they left off twelve months ago to lift the Hurricanes past the Strikers to claim a finals berth. The pair were in phenomenal form last season, but international duties have kept the pair apart in BBL09. Going into the game, the Hurricanes needed something special and the Hobart openers, notably Wade, delivered. The Strikers made a reasonable effort of chasing down the monster total, but it proved to be too many runs in the end.

Although the powerplay yielded an impressive 60 runs, the Hurricanes openers surpassed that with a period of dominant batting. It was not chanceless as the Strikers had the opportunity to pick up Wade, but the chance went begging. Wade had already passed fifty at that point, off 24 balls, with the Hurricanes on 91 and looking in control.

The Stanlake over that bore the dropped catch yielded 22 runs as both Wade and Short peppered the boundaries. In the middle of the innings, Strikers managed two overs without conceding a boundary. However, it appeared that the Hobart pair were gearing up for an onslaught. Wade hit Rashid Khan for successive sixes as the Afghan spin king's powers were not able to arrest the momentum.

Wade reached his hundred just before Short reached his fifty with both milestones achieved in the same Peter Siddle over. Wes Agar conceded 25 runs as Hobart bore down on 200 with three overs left.

In the 19th over, with Stoinis and Cartwright's recent partnership record ready to be broken, Short was caught at long-on. The partnership of 203 was four runs short of the record set on January 12th. The last ten balls brought another 12 runs to the Hurricanes who posted the imposing score of 1/217. If the Strikers were to regain second place, it was going to be a difficult task.

As the chase got underway, Phil Salt hammered the first ball for four before slicing the second to George Bailey. However, the usually reliable veteran spilled a regulation chance to give Salt a life. He struck two more boundaries in the over to highlight that the Hurricanes were not in a position to offer up opportunities.

Jake Weatherald fell in the second over to undermine the start that Salt had given his team. At the end of the powerplay, the Strikers were ahead on 1/66 but not before Salt was dropped again. The English opened soon passed fifty as he looked to exploit the generosity offered to him by the fielders. Travis Head found it slightly more difficult to score but deposited Qais Ahmad into the crowd as the Strikers were keeping in touch with the asking rate.

Salt's luck finally ran out in the tenth over when Matthew Short made up for his drop by taking the catch, off Scott Boland, at deep midwicket. Salt's 66 from 33 balls was important but looked to be a crucial wicket for the Hurricanes.

Head and Alex Carey, joining his captain at the fall of the wicket, found their range and milked the bowling. At the end of the 14th over, Strikers were 2/142 and needed 76 from the 36 balls. Perhaps, it was the pressure of the moment, but Head dragged the ball on to his leg stump to give Hobart a valuable breakthrough.

Jonathan Wells came, and went, in a blaze with 15 while Rashid Khan added 8. The key for the Strikers was Alex Carey, and with 27 runs required off the final 11 balls, the wicketkeeper couldn't clear long-off and fell for 39 off 24 balls.

With Carey went the Strikers' chance to win. Michael Neser made it interesting when he launched a six with 18 runs required off the last three balls. However, he fell, and the Strikers finished ten runs short on 8/207. It was a fine effort from the Strikers, but the Hurricanes were victorious and will play in the finals.

With the defeat, the Strikers lost the opportunity to play against the Stars at the MCG on Friday in the 'Qualifier' and get two chances to reach the final. Instead, they will host the 'Knockout' on Saturday at the Adelaide Oval, and their opponents could be the Hurricanes who will play in Thursday's 'Eliminator'. If Brisbane Heat wins their match, they will host the Hurricanes at The Gabba. If the Heat loses, Hurricanes host Sydney Thunder at Blundstone Arena.